Severely out of stock, slow updates, these were originally an important factor in the success of fast fashion brands, but now it has become Mango's fatal injury, this point, most directly reflected in the sales performance. 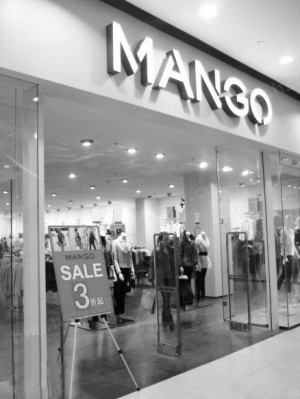 The size of the clothes is not complete, the tellers are "temporary workers"

â€œI havenâ€™t been to Mango since June this year. The size of the clothes in the store is too big for me to wear,â€ said Chen Xiaoben, who has been buying Mango for many years and is a loyal buyer.

Yesterday, the reporter went to the Mango counter of the Lixing store at Mingde Square. The glass shop outside the store was marked with the word â€œbargain sale,â€ and the storeâ€™s clothing was being sold at three fold. The clothes displayed in the counter were not only short-sleeved T-shirts. There are leather clothes, cardigans, etc., which contain almost "four seasons." The reporter stayed in the store for 10 minutes and there were no more than 15 customers to visit, but there was no turnover. Interestingly, Mangoâ€™s â€œnext neighborsâ€ such as H&M, Bershka, and Zara were another scene. Between 30 and 40 customers are buying, especially H&M counters, and the buyers at the cash register have already queued up.

In addition, some of Mango's counters do not have a small size. For example, a white long-sleeved shirt with a discount has only two 170/88M numbers left. The clerk told reporters: â€œAfter the promotional campaign was finished, the small size was too small. sold out."

â€œCan't replenish stocks? Isn't fast fashion brands faster?â€ The clerk said they didnâ€™t know when they could make up for the new goods. She was just a bossâ€™s friend to help with the shop. Chen Xiao Ben said, â€œYingchun Yintai The family is off, I can only run here to buy, did not think so."

Chen Xiaoben is really helpless because what she sees is Mango's last store in Hangzhou. As the earliest fast fashion brand to enter the Hangzhou market, Mango has counters in Wulin Yintai, Xihu Yintai, Qingchun Yintai, Mingde Square Lixing, and so on. In a few years, only one is left.

Performance continues to decline, with agents and brands disagreeing

Severely out of stock, slow updates, these were originally an important factor in the success of fast fashion brands, but now it has become Mango's fatal injury, this point, most directly reflected in the sales performance.

â€œThe reason Mango withdrew the cabinet was poor performance. We gave it the best position on the second floor, but it didn't seem to have a good performance.â€ said the person in charge of Qingchun Yintai. It is reported that Mango's sales performance in the past two years has been falling by 20% to 30%. At the end of May this year, Qingchun Intime was withdrawn.

And more people in the industry believe that the contradiction between agents and brand parties is the main reason for the decline in Mango's performance.

"Mango's all domestic counters are agents, not brand directs. This is rarely seen in fast fashion brands. The addition of agents means the creation of intermediate costs. This is the final category of the counters. The presentation has a great influence, "said industry sources, "Obviously, Mango is not satisfied with the performance of the agents."

However, as an agent, it seems that there are many dissatisfaction with the brand. â€œMangoâ€™s sales have been declining since 2011. We have few models available for purchase, and some dresses and skirts are not accepted by the public.â€ Mr. Zhao, the head of Wenzhou Manya Clothing Co., Ltd., who was once Mangoâ€™s agent, Said, "The pressure of late inventory is also relatively large, we communicate with the brand is useless."

Mango is the first fast-fashion brand entering Hangzhou and is of special significance to female consumers in Hangzhou. However, with the influx of brands such as H&M, ZARA, and Uniqlo, the â€œpioneerâ€ apparently failed to stabilize its own country. .

"In the just-concluded off-season, Mango's sales were between 50,000 and 60,000, less than last year, and H&M and ZARA's performance was one zero more than that." said the person in charge of the department store. . It can be seen that the same is a fast fashion brand, but it has a completely different situation.

In recent years, fast-fashion brands have repeatedly established â€œmythsâ€ in the retail sector in China: ZARA has become one of the highest-performing retailers in China after entering China, and Uniqloâ€™s global sales growth of 70% comes from Chinese stores... ... "Hangzhou has new department stores and shopping malls every year. The fast fashion brand has become a standard that both attracts popularity and makes money," said department store insiders. According to reports, Xixi Ichen City, which opened in May of this year, assigned one-third of its business area to fast-fashion brands. At the same time, the second phase of Lakeside Yintai, which opened at the same time, left the â€œtopâ€ position of the entrance layer of the entrance. Fast fashion brand.

However, at the moment, Mango's nationwide closing stores are breaking this "fast fashion effect". Its subtext is "Not every fast fashion can adapt to China's soil."

The Chinese market has now become the most embarrassing piece of Mango's world map. In Mango's fiscal year 2010, sales in the Chinese market accounted for only 2.7% of the global market (excluding VAT). At present, Mango's official website shows that there are 115 stores in China, which is 42.5% less than in 2012. Only four domestic stores closed in June this year.


The fast fashion brand has almost become the darling of department stores and Shopping Mall. However, not long ago, Mango, the fast fashion brand that first entered Hangzhou, was another situation. Its store in Yintai Qingchun shop was officially withdrawn, followed by news of closed stores in Shanghai, Beijing and other places. This is not true for similar brands today.

In the past few years, Mango has already withdrawn four of the five stores in Hangzhou. Many buyers complained that â€œincomplete sizeâ€ and â€œnewly slowâ€ also led to a sustained double-digit decline in sales, and eventually closed stores, while at the same time, dissatisfaction with the agents and brand parties. It's very dusty.

The withdrawal of Mango has made many Hangzhou girls inescapable. The brand has opened up their pursuit of "fast fashion hot", and for department stores and shopping centers that have been increasing year by year, fast fashion is also a standard guarantee of popularity and buying. "The evacuation of Mango this time took away the memory of loyal fans and also destroyed the retail myth of "fast fashion must be fire."